I guess kids should surprise you.  I mean, why wouldn’t they?  They are their own little independent selves, interacting with a world from the perspective of adult knees and trying to make sense out of the chaos of noise, lights, movement and touch that surrounds them constantly.

They are naturally built to focus in on certain things.  They know to look at the human face to read emotion. They know to pay attention when enumeration begins, but that it’s possible to ignore for quite some time the word that’s supposed to signify their identity (ie, the eldest responds to “One….” much faster than he answers to “Micah….”).  They know that if they crawl into bed at 2 am and say they’re “scared,” the warm body there will accept them and drape an arm over them in protection. They know that the relationship between a mother and her child is vital to the child’s survival and they will attempt to repair it whenever needed.

But they also seem to know that it’s pretty unconditional – and that relationship can be pushed pretty far and stretched out and pulled and yanked… and yet the coil will still spring back. So my kids love to check the pull of this coil.  They love to see how loudly they can screech as they chase each other around the loop of the house.  They love to test how much water is too much water out of the bathtub as they splash gleefully. They like to explore the effects of cheerios flying through the air and scattering upon the carpet and then eating them up “like doggies.” They like to measure how frequently the word “no” can be said before it is followed by a long tirade of how and why “no means no,” or a distinct rise in the ending tone of the word, or a movement of a large parent towards them to block their original goal.

It still surprises me, though, when Micah has one of his really big blow-outs. Like this afternoon, when we decided to get into the car and go someplace fun, but he gets upset and starts the fight with removing his seatbelt as we’re driving 50 mph. This calls for an immediate pull off the road and a discussion on safety….and yet it’s followed by repeated hitting of his brother, taking off the seatbelt and throwing things in the car.  Each time, I pull over and remove him from the car.  I breathe deeply.  I count to 10. I try to remember all those tips from numerous parenting books (none of which has mentioned specifically how to handle a size 2 boy shoe thrown at the back of one’s head while driving…hmmm….). We work ourselves up to 4 hours of time-out upstairs by the time we’ve spent 40 minutes in and out of the car… going nowhere. I feel bad for the other two in the car. And when Micah and I finally talk about it later and I ask “why,” he says, “my brain tells me to be bad.”  Okay – what do I say to that?

Gosh, I’m glad he doesn’t surprise me too often with this. But it does stop me in my tracks. I start to wonder what’s going on…and if I’m supposed to be doing something else with him. Am I working too hard and ignoring my kids? Should we go back to therapy? Does this kid need something else? What sparked all that? Is this something I’m triggering or continuing? Is he starting to react to the stress of the craziness that is hitting our lives recently? 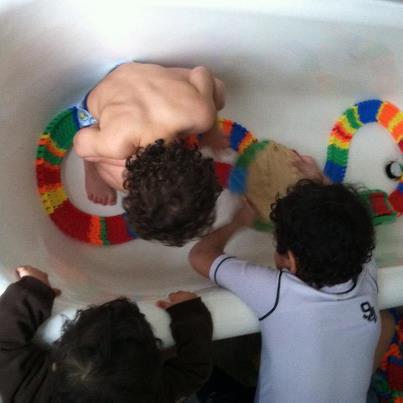 I prefer the surprise of being called to “look what we did!” and finding car tracks encircling the bathtub. And sharing the joy of creating something new out of connecting toys. And smiling at the surprise of making a tunnel under a pile of snow. And giggling together over a video of funny cat tricks. I so often hear the phrase “oh, the joys of parenting” and there are many joys for sure, but the sarcastic tone that sometimes accompanies that phrase is also very true some times. There are some “joys” that are hard to handle. But the coil always snaps back into place….

It is a very tight coil built of the strongest material ever – love.

(8:00 pm addendum: Now I’m wondering if today’s blow-up was a harbinger of illness. Micah fell asleep on the couch at 6 after complaining of “being cold” which he never is and a headache. Sigh. Gotta love these viral-infested little guys!)