The pastor this morning asked us to think about that “moment” when you felt a mother’s love for your child. She started by describing the pregnancy and the feel of the baby within and the developing love as you bonded with this new creation. And then those first few moments after birth….and the first days and weeks when your love grew. The process is so very different when you are part of a system – the foster care system.

I was “in love” with Micah from the moment I first saw him in the hospital bassinet….barely listening to the social worker tell my sister and I about him. Yearning to pick him up as she briefly left to find a set of mismatched clothes to put on him. Staring at him in the back seat of the car….well, staring at the back of the carseat facing the other direction. Giddy about getting him home and holding him. In awe during the first few middle of the night feedings. I was in love.

But it was not a “mother’s love” – I was not his mother. There was a qualifier in front of the word.  “Foster.”  It was always there – “I am a foster mother.”  This is my “foster” child. We have “foster” children. It was not until Micah was 22 months old that I could jump over the “foster” word and leave it out altogether. Not until that moment in the court room with tears welling up in my eyes and my heart so full of love that I could fully claim to be a mother….that I could claim him as my son.

So that love was a journey….a push and pull….an embracing of the little boy and a slight holding back in fear and worry that it might not work out….that he might return to his biological mother. Yet I had a sense with him that it was almost 100% okay to love him. Similarly, it seemed so certain with Noah. He was two days shy of his first birthday when I was told that I was his mother, though the love had blossomed long before then.

And then there was Seth. Seth began with a phone call that asked if I was ready to “adopt another?”  I honestly wasn’t prepared to answer that within the 15 minutes that they wanted a call-back. I knew at that time that I was struggling with Micah’s behaviors. That Noah was just embarking on his two-year independence regime. That I was ramping up work on a new nonprofit organization. It was a busy time. Yet….and yet…Seth was blood brother to the boys. My answer was “yes to the fostering… time will tell about adoption.”

Two days after picking him up from the hospital, we went on vacation to the beach. I spent the week bonding with him – shocked and nervous about another boy. Trying to convince myself that this would and could work out. By the end of the week I was ready to be mother to another. And….a letter sat in our mailbox waiting for us to come home. A letter from a man in prison professing his love for his newborn son. Happy that he had a home to stay in until his father would be free to come get him. Struck down, I cried. 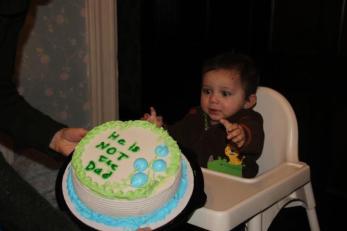 paternity testing.  We celebrated with a cake and my heart began to take away a brick or two, a shingle, a siding…open up some space…and let the mother love take hold.

My three sons…(minus the “foster”).

1 thought on “The beginning of “motherly love””