I sat on the couch the other day….taking in the perspective of the house….watching the boys bounce around in an active game of football. (Super Tall Guy throws it to Flipper 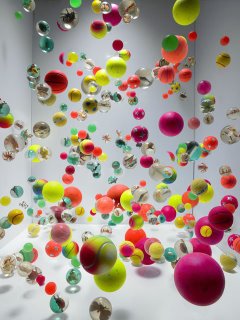 who tries to make it around the inside track of the house one or two times before his flags are ripped off. The “less-essential” members of the team pretty much just run and jump and pick up a toy and play with it for a few minutes then rejoin the team – pretty much, they are less than essential to the scoring capabilities of the team.)  The image of little rubber bouncing balls came to my mind – that’s what my household is almost continuously – a set of bouncing balls.

Naturally a set of balls bouncing about in a finite space lends towards occasional collisions. When you have a particularly large ball like Super Tall Guy who also thinks it’s fun to bounce into and off other balls….it’s quite a bit less fun. And when he’s in one of his pesty moods, like he was last Monday before school, it’s really not fun at all.

After he careened into multiple children and finally sent a shooting ball into my mother’s abdomen, I had had enough and chased him at top speed upstairs. He knew he was in trouble. I knew I was in trouble as I wondered how to wrestle him to the ground and wait for my anger to subside so that I wouldn’t actually harm the poor kid. Practically sitting on him, I looked him in the eye and informed him that he was grounded from all fun this week – including the parent-child last practice soccer game, the Halloween party at the gym, and the party with his favorite friends just outside of Cleveland. That got his attention.

Now I had a good week. Having him in the position of not getting his fun activities, we came up with a star system to earn them back. Then, if he wouldn’t listen to me this week, I could threaten to take away a virtual star that existed mostly in my head, but sometimes on the dry erase board hanging on the refrigerator. Of course, he worked hard to get 5 stars to go to the soccer game….and it got rained out. And then worked for another 10 stars to get the day of activities and parties on Saturday.

Now I had to do that oft-recommended parenting technique = catch them at doing something good. You can imagine the challenge of singly out a bouncing ball and informing it that it’s on the right track and doing well. So, a star for brushing your teeth in the morning when you hate doing that. A star for getting dressed without me reminding you. One day, I realized I was pretty desperate when before the bath, I said, “Wow, Super Tall Guy, you actually wore underwear today – you get a star for that!”

I’m liking this system….so then I realized I need another big carrot to dangle. Fortunately, my sister bought tickets to the circus – of dragons! – now, that’s a great item to have in the back pocket!