It quite likely could be said that some people seem to thrive on chaos. Given the way things seem to be going, it is highly likely that my sister and I are that type of person. We seem to invite it in to our house. Let’s see – there was Super Tall Guy, The Flipper, Mr. Ornery, along came Trouble followed less than a year later by The Little Guy. If five boys in a five year range weren’t chaotic enough….we added a sweet (yet apparently fragile) Bichon Terrier to the mix.

Let’s just say that we spent almost the entire weekend rearranging two rooms of the house. The small third-floor room used for storage (since my “family” essentially lives in what might have been an attic) has pretty much been moved into my bedroom. This tiny space has now become the new “toy room” (and Super Tall’s dressing room).

Spending so much attention on this process sometimes leads to

But we managed to convert the former unrecognizable heap of a mess of toys into a beautiful guest room….(we sat in an exhausted heap in front of the TV this evening arguing over who had to get up to get the remotes…sigh…!) 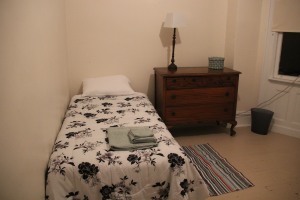 ….for Wimon ….a woman from Thailand….a friend of a friend of my parents (you see what being Missionary kids does?!)….who is arriving late Wednesday evening to begin an English as a Second Language program in preparation for a doctorate in physical therapy. She’ll be staying with us for a “bit.”

I use Lego play as a way to coax a few words out of strong, silent Super Tall Guy. We talk about a new person arriving in the house. Someone who probably won’t speak English very well. He pauses and says quite quietly “I might laugh when she speaks.” “You just might,” I reply, “because it will sound different to your ears. She’s going to be so happy to learn from you” (and please, please….don’t you boys start chanting your usual body parts chants!!! Or run downstairs all “carefree” after your baths. Or burp and “putter” as if she’s family!). “Oh, she’ll be here for Halloween,” he exclaims excitedly. Yes, that should pretty much blow her mind in her first two weeks of culture shock. “And Christmas,” he continues eagerly. So far, it seems like this might go pretty well….

…though I’m thinking that we might have to quiet down the household a little…actually, I’m hoping that she might quiet it down a bit 🙂 !!

Sometimes I wonder “what am I going to write about this week?” And then, there always seems to be something….always another adventure!

4 thoughts on “And then a little more chaos!”