Over the past few years, we’ve taken a mini-vacation to Yogi Bear Campground about an hour and a half southeast of the city. We met a delightful family a couple years ago with kids around the same age and personalities and energy levels that meshed with the boys. So every year we hang out together around the campfire making smores and popping in and out of the pool and going down the small water slides. The kids ride on their bikes and spend hours playing with whoever shows up at the Gaga pits. The biggest excitement of the campground, though, is the golf cart that I rent and then spend most of my days driving kids around.

Last year we decided to go off-site and visit Ohiopyle 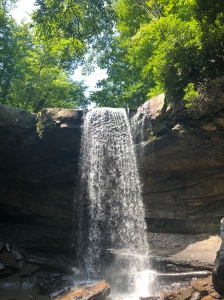 where the boys clambered around Cucumber Falls and experienced the thrill of jumping off a rock that juts about 12 feet out of the water and you can go deep into “just the right spot” about 2-3 feet away from the rock. This year they were so eager to go back that we even bought a cucumber to take along with us and hide in the rocks for others to find.

We started out Saturday morning and happily clambered down the sets of stairs to the bottom of the falls. Mr. Ornery (age 10), The Little Guy (age 8), my nephew (age 9) and our friend HockeyGirl (age 9) climbed over rocks to the base of the falls and Mr. Ornery ventured into the freezing water to be splashed by the spray. Then we ambled down the stream where the water of the falls merged with the Youghiogheny River. From that point, we could watch groups of people in kayaks and rafts as they ventured in the white water rapids. 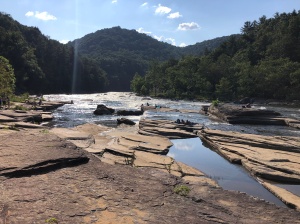 Remembering that last year, we had hiked to the right of the tributary and came out to the jumping rock, the boys set off scrambling over rocks as my mom (age 78, by the way) and I hurried to keep up. Something in my head wondered if there wasn’t an actual “trail” that we followed last year….and don’t trails usually have markers on the trees or the rocks?….but the thought slipped in the need to keep up with the adventurers. After 20 or 30 minutes however, I realized that we weren’t coming to any trail and the rocks were getting larger and more difficult to climb over.

Pretty soon it was clear that we were out bouldering. And by the time it was closing in on a hour of exercise, I kept sending Mr. Ornery ahead to scout out if we could make it around the next obstacle. (Of course, what appears to be “doable” to a 10-year-old boy is quite different than a mom approaching fifty who is thinking of her own mother using a walking stick behind her!) My anxiety was starting to rise as it became clearer and clearer that we were no where near a path, the overgrowth was pretty overgrown and rose steeply up the hills to our right, and there loomed a huge rock up ahead. I couldn’t tell if it would be better to forge ahead or go back. 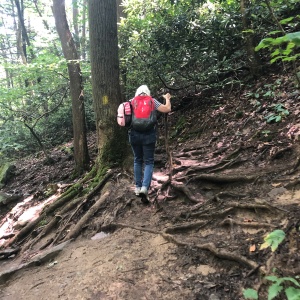 I was stressed that my mom would tumble and break a hip or a head. I worried that one of the kids would get hurt as I watched them crawl under a fallen tree. Just at my peak stress about safety, my nephew let out a blood-curdling scream as a bee stung his cheek. This resulted in me squeezing under the tree, hugging him and talking down my 10-year-old who was hyperventilating with a fear of bees now. This was a bad idea, I kept screaming in my head. The kids were exhausted and hungry. There was no path ahead. My mom didn’t want to jump in the raft of the “first aid” rafter who had floated nearby a little bit earlier. I just didn’t know what would be best to do.

That’s when I heard some voices and looked up to find a couple guys coming down the side of the hill. I yelled out, “Is there a path up there?” He couldn’t hear me. I dashed back under the tree and scrambled up to him. “Yes,” he replied, “There was a path going back and forth that we crossed. Do you need help?” I gave him a hug as he directed the kids, my mom and I past tree branches and up onto a well-worn trail. “Thank you, thank you”, I yelled out as we parted and started following the yellow-painted trail markers. “Oh, so this is what the trail should be, eh?” said my mom, the experienced Girl Scout leader!  Yes, Mom….this is the trail we were supposed to be on (and the one that HockeyGirl later said, “Oh yes, I saw a sign directing to a trail right when we started but the boys were already off to the rocks!” Silly girl, boys don’t look around, they just bumble along. Feel free to yell out next time!!)

And that trail let us right to the rock which was right down the stream from the natural water slides that the boys had enjoyed the day before. And the kids got refreshed in the cool water while my mom and nephew walked up the road to get the car…and much to the great delight of The Little Guy, we made it back to the campground just in time for the Mardi Gras parade. The kids rode along throwing out beads to the eager kids and adults lining the roads of the campground.

“Let’s chalk that up to an experience,” suggested HockeyGirl at the end of the “hike.”  I gave her a huge high-five. “Yep, let’s call that off-ice, cross-country, cross-training for you, my dear HockeyGirl,” I replied.

Bouldering sure was an experience. Hopefully the kids can see how amazing they were to work together and keep persisting even when one was hurt and all were tired and hungry. Hopefully the kids can understand just how beautiful it is to help one another along life’s journey and guide each other to the easier paths when possible. Hopefully the kids can lift their heads and be awed and inspired by the beauty of this world – the gentle roar of rushing rapids, the power of moving water in carving out rocks and the joy of exploring creation.

And hopefully next time we’ll all look out for trail markers before setting off. Well, sometimes. And sometimes it’s nice to end up bouldering.