I strum my fingers together and smile devilishly. An unexpected plan has come together this summer – “practice” camp.

We stood at the registration table on Sunday afternoon. Nine-year-old Mr. Ornery was unusually subdued as they searched for his

name on the list. Beside him and slightly in front of him, the Little Guy bounced up and down and tried to answer any question with as much true or somewhat-true information as he could. The auburn-haired woman peered over her dark glasses and said, “Ah, are you staying for mini-camp?”

“Oh, yes,” she proceeded. “In addition to Kids Camp, we’re also running mini-camp this week. How old is he?”

“Great. And where do you live?” she asked as her brain clearly contemplated her next question. Thankfully she held in the “Why don’t you just run on home and pack him up,” and instead said, “When you get home, go online and register him. Then bring him here Wednesday night.”

Wednesday night? Both my “young” guys in camp at the same time?!? I filled out that online application immediately, followed by mad texting and emailing to see which friends I could gather for my two glorious nights of “limited” kid responsibility (the twelve-year-old fends for himself pretty well these days).

For days it was nonstop questions. “Has my flashlight arrived from Amazon yet?” “Is it Wednesday yet?” “When do we go?” “Will you miss me?” “Did the mail come yet with the flashlight?” “How about my sleeping bag?”

He fell asleep on the short trip up to camp. Our car was greeted by two very enthusiastic camp counselors who had been his summer day camp counselors. They screamed his name and rushed to open the door, slathering him in hugs and kisses. The other counselors stared. This kid is going to be just fine with these young mother hens all over him.

As we started up the path to the office to register, I spied Mr. Ornery leaving the pool area. He saw me and came running over for a wet tight hug. “I’m having a great time. Love you. See you later,” and off he went waving the love-you sign behind him. My eyes welled. I had been worried that I’d arrive to find an unhappy little man ready to pack up and go home.My heart though was hoping he would be enjoying it and have the full camp experience. Thankfully, this little clown seems to have made some friends and found his own space. I just hope the presence of the Little Guy won’t be too disruptive. The Little Guy commands an audience. He smiles and people melt. I had checked that Mr. Ornery wanted him to come, but I’m still thinking that the stories should be interesting.

And so… I drove off….in a quiet car….praying blessings upon them for peace and safety and friendships and a deepening devotion.

And thinking – “Now, my young padawans, as you graduate from mini-camp and one-week camp this year….the “secret” plan is “Summer’s Best Two Weeks” next year!”

Did you catch that?

This might not go completely according to plan. The report from Super Tall Guy in the weeks after his camp experience was that he didn’t like it too much. He was bothered by a set of brothers in his cabin who apparently had a lot of brotherly “bickering” and overall seemed pretty tired by the constant activity level. (The lack of any screen and internet might also have contributed his unhappiness….But we’re going to keep working on the importance of screen-free weeks and finding an “away” experience during those two weeks!).

And, of course, my two days “off” didn’t go completely as planned. The irony of parenting is that just when you are free from the responsibility of the daily grind of caring for the younger two, the typically-independent eldest develops a fever of 102….and so I am still “needed”!

*ps – I miss these guys terribly, but am so proud of their bravery in stepping out a bit on their own.

I sat at the pool today ….a blank laptop screen in front of me…reflecting on a blank mind with nothing to say….until I left a piece of my heart…..at a summer camp….in a cabin with five other boys, ….and a counselor named Lyvth.

Super Tall Guy went to this camp in October for two nights with his fifth-grade class. He had a great time. He and his best friend decided they wanted to go for a week in the summer. I am hoping that they have a great time again.

It was a tough weekend leading up to it. The poor guy had some GI upset which mercifully resolved. Then we had the suspense of his friend’s baseball tournament. Drop off times were from 4-6 pm. The baseball game was at one. If they won, he would have another game and then not go to camp until the next morning. Super Tall Guy was reluctant to go to camp without his buddy. I tried explaining the importance of that first night. You are going to hear all the rules. You pick your beds in the cabin. You meet your counselor. Other kids are new too. It’s the time to get settled in together. If you wait for the morning, you will miss some important things.

He was not swayed. He needed his friend. It was too stressful to think about being there alone.

Thankfully, the team lost and their tournament ended. We made it to camp at 5:30 and they got the last two bunks side by side. 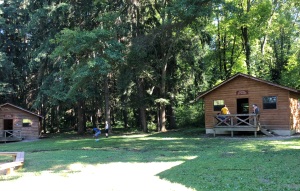 B’s mom and I helped them make their beds. We took the mandatory photos. We awkwardly stood around. The counselor gracefully exited for good-byes. I sent the “annoying” younger brothers outside for a few minutes. I leaned over to Super Tall Guy, kissed the top of his head and said, “I love you.” “Leave,” he replied. Yes, that’s my boy.

We stood outside the cabin for a minute. I swallowed my heart skip and quieted the tears that threatened. My eldest was in a cabin and I was leaving him. This time he had one friend and a “village” of about fifty other boys to meet. Instead of stories about classmates keeping him up all night, he’ll have stories of five other boys he’s going to get to know, some of whom were returning for the third or fourth time. Instead of teachers and school counselor watching over him, he’ll be on his own to remember the bug spray (I’m pretty sure B will be better at remembering it and reminding him!), to figure out where he should be and when, and to get to sleep. Instead of being surrounded by people who know him, he’s going to be on his own negotiating his stance and emotions and behaviors.

Lyvth seemed like a really great guy in the two minutes I saw him. The returning campers had great rapport with him. He looked like he was going to be fun. I’m entrusting my son to him.

Most days, Super Tall Guy drives me crazy. He pushes all my buttons. He argues with 99.9% of what I ask of him.

And yet, he holds a pretty big chunk of my heart.

For the next five days….

But, since there were three boys chattering happily (and occasionally unhappily) in the back of the van as we drove home, there wasn’t much mental space to think about it.

Now, at 7:30, I sit at the pool again. The pizza is delivered. The beer is cold. The heart is full. And I’m praying God’s blessings on the boys.

I am happy for Super Tall Guy.

I sure hope he’s happy too.