The other week I took the boys to see a movie with my neighbor and her two children. The back of the minivan shook with glee. The popcorn flowed over laps and floors. The moms constantly “shushed” the giddy kids as the movie began. But eventually, the story compelled them to quiet down, punctuated every once in awhile with a great contagious giggle.

There once was a group of Yeti’s who so feared continuing death and slaughter at the hands of man that they moved high up into the top of the mountains and created a layer of fog to hide the humans in the land below.

There once was a group of humans who believed that Yeti’s were so violent and dangerous that if they ever saw a Yeti, they would shoot to kill.

But, there also was once a Yeti named Migo who was so fascinated by the possibility of a “Small Foot” that he risked leaving his home to go see if these creatures really existed.

And, there once was a man named Percy who was so desperate for fame that he searched for the Yeti as a tool for popularity. But when his fellow men came out with guns and armor and shields to fight against the Yeti, Perry took a step forward in faith and solidarity. Standing together, Yeti and humans learned that they are more similar than they are different. They discovered that to dispel fear, they needed to begin to understand one another and to respect each other. They discovered that they did not need to live in fear, but could live in community.

Our world is filled with fear. We are so focused on how we are different from others, that we have become scared of those differences. We want to build up walls around us. We want to stick with “our own.” Instead of becoming more unified, the pressure is to become more polarized. More extreme. More scared.

As the days have crept on, as the funerals have taken place, as the songs have been sung at the vigils, as the community has marched and as the families have mourned, all of us have felt a deep, deep aching sadness that has called to our spirits. A deep despair that has tried to blacken our soul and nibble away at our hope. And each of us has had to reach out to our community of friends, family, neighbors and even strangers gathered around us to rekindle our flames.

Because when fear tries to sow hate and hate 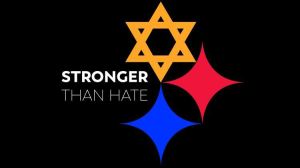 tries to capture our hope, we stand together to say “Absolutely not.” We raise our voices to say, “Love is and always shall be stronger than hate.”

When we take a step towards each other. When we learn about others and discover that they too are humans just like us. When we are willing to look into another’s eyes and see their fears and their hurts and their hope which is just the same as ours, then….then, we will learn to love others.

As I cleaned up around the house this morning, I heard The Little Guy upstairs reading to his brother, “Do not worry about anything. Instead, pray about everything.” When the current world wants us to worry about everything and everyone, we are reminded that God is bigger than that and loves us all.

So, together we kindle the hope.

Together, we maintain the love.

Together, we treat others as God’s Holy creation.

My eldest son was at it again, torturing his younger brothers. You know the drill, he’d fake throwing a football at them. They’d scream. My ears would ring. We were running late. I was tired and stressed. I did the calm “please” technique to alter his behavior. I tried the old “counting to three” technique without any change in his aim. So I got up and removed the hard ball from his hands to which he replied, “You b**ch.” Yes, my son has learned words that I didn’t know until I was an adult. But, contrary to his desires that morning, such disrespect for his mother earned him a serious consequence of being grounded from outside play and the worst punishment of all (in current scale) – “no trampoline today.”

Reflecting later, I realized that one of the front runners in the political field this year is a man saying the very things to which I dole out serious consequences. I am working hard to shape my young boys into caring, considerate, compassionate men and I have before me the very antithesis of this behavior seeking applause from his supporters.

“I love the old days, you know? You know what I hate? There’s a guy totally disruptive, throwing punches, we’re not allowed punch back anymore…. I’d like to punch him in the face, I’ll tell ya.” –Donald Trump on how he would handle a protester in Nevada, sparking roaring applause from the audience, February 22, 2016

Here, one of America’s most “powerful” men (only because people seem to want to equate power with money) is expressing his desire to punch another human being in the face in response to an action. What do I tell my boys over and over? “We use our words. We do not hurt other people.”  “Hands are for helping, not hurting.” It is in their very nature to respond physically. My boys are always wrestling. They are always walloping each other. It is with time and with love and with constant correction that I shape them to respond to each other with kindness, to see another’s point of view, to control their temper and their bodies, to seek peace and reconciliation. It is an exhausting process and yet I persist because it matters.

“I could stand in the middle of Fifth Avenue and shoot somebody, and I wouldn’t lose any voters, okay? It’s, like, incredible.” –Donald Trump, speaking at a rally in Sioux Center, Iowa as the audience laughed, January 23, 2016

There were 23 mass shootings over the course of 20 days starting February 19th, from California to our neighbors here in Wilkinsburg. Across 17 states, 128 people were shot and 42 died (from Esquire). There is unspeakable grief for at least 42 families. And, this is just “mass shootings” and doesn’t count the shooting deaths of just 1 or 2 people (like the remarkable physician in Texas who was killed by her husband last week, leaving two young children behind). Should one of our most visible “leaders” be promoting violence, the kind of violence that kills people? The kind of violence that takes kids from their parents, parents from their kids, brothers and sisters from each other, best friends split forever? Violence that leaves emptiness and pain in the hearts of so many.  Violence the type that I talk to my sons about and ban them from video games that make it seem realistic and that disassociate it from the pain and consequences it produces.

“Women: You have to treat them like s–t.” –Donald Trump (italicized quotes from a recent compilation)

I don’t even know where to begin on this one. I am a single woman raising three incredible sons whom I adopted from the foster care system because there are kids in this country who need a family and need love. And I am trying my hardest to raise my sons to respect people – all people, men, women, children, people of different backgrounds, people of different faiths, people of different skin tones (because our household is a blended tone one), people of all walks of life. In fact, I am teaching my boys not to treat anyone like s—t!

I am a lucky, lucky mother. My children are young. They do not watch the “real” TV, they watch episodes of Pound Puppies and Octonauts. They are not exposed to the news. They probably don’t even know that Donald Trump exists. I am lucky. I do not have to explain (yet) how a grown man who is displaying so many things that every parent works to correct in their children is getting so much attention. I do not have to explain why people are afraid and how their fear is driving their praise of this behavior rather than disgust. I have time to prepare.

But, one day we will talk about this complicated mess. And I only hope that on that day, I will have a much better role model that I will be pointing my sons to and saying, “My boy, that is the kind of man you need to be. Strong and courageous. Kind and compassionate. Empathetic and understanding. Humble and willing to serve. Be the man God has created you to be.”